My little family has started out the new year with a big change. We’ve bought a house! It’s not a new house, it’s over fifty years old, has had a bit of updates done already, and will need more over time. We are excited about the change, for we’ve been living in apartments for far too long.

I got all the items on my house wish list: wood floors, fireplace, and a porch. However, I also got a lot of fix-up projects, but I’m excited about those as well. We were a bit disorganized with the move; we started moving stuff before completely packed, and not having gone through and organized/ thrown stuff out enough ahead of time. However, before moving anything, I did make a trip out to the house to clear and claim the space. This is what I did:

Before even going in, I stood at the front of the yard and lit a candle in a glass holder. I announced to the spirits of the land that this property is under new ownership, that I am the matron of the family, and that we seek to live in harmony with the landvettir of this place. I also announced that all baneful spirits must go in peace for we are under the protection of the gods. Then I walked sun-wise around the property with the candle singing the Anglo-Saxon Hallowing Charm.

At last it came time to go inside. I made sure that bread and salt were the first items to be carried across the threshold. I then repeated a similar announcement to the one I did outside, this time for the house spirits. I did the Hallowing Charm again, walking from room to room all around the house, this time with the candle and a bell. I went another round, censing with juniper and sage. At last I did a third round asperging with water. Thus completed the ritual cleansing and claiming. Further blessing is yet to come, and I hope to do it with friends.

Though our move was chaotic, we are all unpacked now and settling in rather quickly. It already feels like home, which tells me we’ve chosen well. 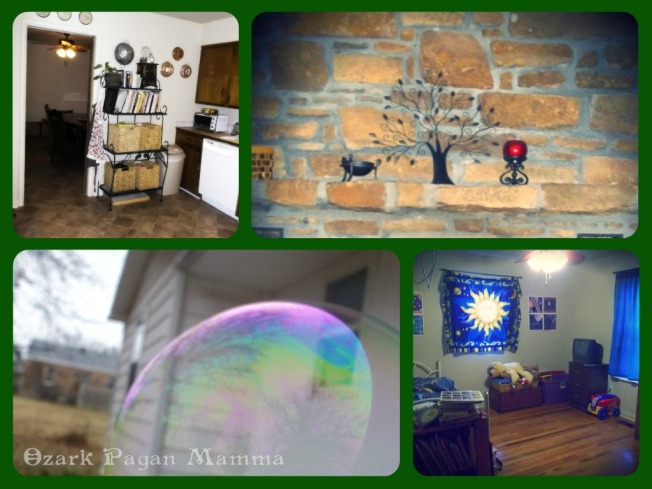