In ADF Druidry, the Two Powers Meditation is a grounding and centering exercise designed to bring about spiritual balance in the individual and open one up to the primal powers of Earth and Sky. There are similarities with the Wiccan grounding and centering meditation. However, the Wiccan version most commonly works with Earth energies only.
The “Two Powers” meditation is more than what the name suggests. It might just as well be called a Well, Tree, and Fire meditation, or the Three Realms (Earth, Sea, and Sky) meditation. In each individual lies the potential of the World Tree- we are life, we are living. The Two Powers meditation serves to remind us of that.

When we send our roots down into Mother Earth, we are re-affirming our connectedness and love to and for her. She is the richness of life, the food that nourished and incubates the seed, and also the grave of us all. The Two Powers meditation doesn’t stop at reaching down into the Earth. We go deeper still to find the deep waterways, the waters of life that sustain and connect us all. It is the primordial waters, the Well of Wisdom, from which all life arose. It is the waters of the womb, the well of Mimir where Wodan’s other eye watches, and also the waters from the sea that leads to the Shining Isles of the Otherworld. It is the realm of death and the Ancestors, but also of rebirth. Deities connected with the Earth are sometimes also connected with water in some form. The Irish goddess Danu is believed by some to be an earth goddess as well as a river goddess. Some believe that Frigga took the place of an earlier earth goddess, and Frigga’s home, Fensalir, means “Fen Halls”; wetlands. The powers of  Earth and Water are primal, creative, nourishing, life-giving powers. Life would not exist without them. We draw nourishment from them up through our roots, as a babe suckles her mother. The power of Earth and Water flows through us, out the top of our heads, and back down into the Mother again, re-nourishing her, not unlike the tree that reciprocates by shedding leaves to nourish the Earth. 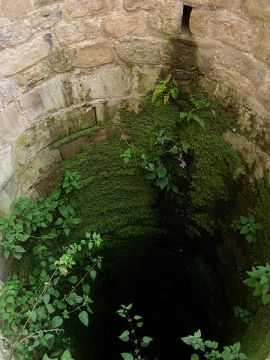 Though we drink from the Mother, we realize we are not mere babes, so we stretch up on our hind legs and reach our branches upward toward our fathers and mothers in the sky. We reach to the sun seeking balance and growth, for without the sun, nothing could live. The sun is a star, among countless stars, and the source of fire. The heavens are bright and wondrous, the home of the Shining Ones. It is their light and inspiration and power we draw upon when doing this meditation. The power of the Sky is pure energy and warmth. When this power is drawn down into our bodies to combine with the Earth energies, the result is the essence of magic itself, for all the powers needed to bring forth and sustain life are combined, energizing and balancing us, giving us the realization of being alive in the moment and in this world.

This morning I gradually woke up thinking about something I dreamt- only it wasn’t quite a dream- it was some kind of hazy philosophizing.  It was like I was contemplating deity in my sleep, and the general feeling I had from it was one of pessimism.  In my semi-dream state, my thoughts or dream-voices were arguing the case for atheism.

Throughout my adult life, my beliefs about deity have flitted around a bit.  In my late teens, I whole-heartedly believed in the Wiccan duality of God and Goddess.  I believed there were actual spirit beings, residing in Nature or in the cosmos, who were the Lord and Lady.

Later, in  my twenties, my beliefs turned more toward agnostic bordering on atheist.  I was really into Jungian theology; archetypes, the collective consciousness, and all that.  The problem I began to see with this scenario was that if Jungian theology is one’s only philosophy, it eventually leaves a shallow feeling in the stomach- for it seems to rest upon the basic premise there is no spirit universe outside the mind of humanity.

Then I read Gaia: A New Look at Life on Earthby Dr. James Lovelock.  The Gaia Hypothesis–  the idea that the Earth may be a living organism- really blew me away!  (I still believed in psychological archetypes, but I added pantheism to the mix, and my agnostic/atheist beliefs kind of just faded away for a while.)  My ideas about deity began to take on solid form, quite literally.  I no longer thought of them as beliefs, but as knowledge, understanding, experiencing.

Then another thing happened- a guest minister came to speak at the UU church I attend and her sermon was based on the book The Living Energy Universeby Gary Schwartz, and Linda Russek.  The Universal Living Memory theory proposes that everything is alive, eternal, and evolving, and that all dynamic systems have memory.  I thought this was nothing short of amazing.  It gave me reason to believe in life after death- the one part of my belief system that I was still agnostic about.  It also enlivened my belief in magic.  (Before I had only thought of magic in psychological terms- the power of belief and the shared subconscious, etc.)  This book awakened new possibilities in my mind, in my imagination.  Remember when you were a kid and you believed that all kinds of wild and silly things were possible?  Realizing that they weren’t is like saying good-bye to something wonderful and magical.  Well, reading about the Universal Living Memory theory was like getting some of this magic back.  So many more things are possible than what we know.

Learning about Celtic Reconstructionism also opened up new ideas of spirituality for me.  I began to explore the concept of ancestor worship, of deity being also ancestral, and the idea of honoring spirits (of place, of the land) as well as deity.  Polytheism and animismworked their way into my belief system.  It would not have been possible for me to believe this way before I read about Universal Living Memory theory and the Gaia hypothesis.

Now I think my dream or “dream state” was trying to get me to think about these things.  I think it was a reminder to examine my beliefs.  All this stuff is not at the forefront of my mind on a daily basis.  I guess it’s just too much to think about, and it may sound crazy, but I think my mind may go into disbelief mode now and then in order to function for day to day stuff.  So what I need is to remind myself from time to time why I believe the things I believe, and think about how they all fit together, and how my life should reflect those beliefs.

So how does magic work?  I believe that magic is a way of influencing energy.  Everything is made up of energy, even things that seem solid, are actually energy and are changed and influenced by everything else- much like when you put an onion in the refrigerator and after a while, other foods in the fridge start smelling/tasting like onion.
There is also that energy that keeps us all alive- the “life force”, or “spirit of life”.  You might think of this also as part of the collective subconscious- the part of the subconscious mind that is shared by a society, a people, or all of humankind.  It is the medium in which prayers and magic flow.  It is best communicated with through symbols, drama, and ritual.  The communication is reciprocated through dreams, divination, and visions.
To learn more about energy, I highly recommend the book “The Living Energy Universe” by Dr. Gary Schwartz, Linda Russek, and Paul Pearsall.