The first night of Yule, Mothers Night (Modranecht), is one of my most cherished rites of the year. It is not only a time that I honor my patron goddess Frigga, but also the ancestral mothers and female guardians of my family, my Dísir. Earlier in the day we set up and decorate a Modranecht altar, in their honor.
(We start our 12 nights of Yule on a set date, Dec. 20th, regardless of the date of the Solstice.)
For our commemoration of the first night of Yule, we use a simple blót format such as “A Heathen Kitchen Witch’s Blót“.

Our Call:
“Hail mother Frigga, beloved Great Mother of hearth and home.
May you keep our household whole and safe.
May our family receive prosperity in the coming year.
To our family’s Mothers, our Dísir, going back in a line to the beginning,
You who have watched over us and loved us always. Bless us in the coming year!
We remember you with love and honor you this night.”

Blessings, toasts, and libations are made. Then we extinguish all other lights and light the candles on the Yule log. We have a simple meal of Golden Cream Soup in honor of the Mothers and the reborn sun.

Later, we enjoy individual little round Yule cakes (Julekage) and read “Frigg and the Goddesses” from D’Aulaires’ Book of Norse Myths, and “Grandmother Winter” by Phyllis Root.

This is my first Yuletide season as a follower of Ásatrú. Before (as a UU Pagan and as a Celtic Reconstructionist), I celebrated Yule in a very basic or general way, concentrating mainly on the solar symbolism for rituals. I’ve always loved all the customs of the holiday- the songs, decorations, food, etc., and I knew (and reveled in the fact) that those things were pagan in origin. What I didn’t really think about was that those customs were specifically from Norse culture. They were not just pagan, but specifically heathen, and the symbolism is deeper than I ever knew. (And after being Pagan 25 years, I thought I knew everything!)

Something that I guess still amazes me is that Ásatrúar celebrate Yule for 12 nights. Each night is sacred for a different reason, with different deities, spirits, or ancestors to honor, things to meditate upon, and (on some of them) traditions to enact. That’s a lot of celebrating! I’m still soaking in the knowledge of all these traditions, but one of the 12 days that appeals to me especially is Mothers’ Night.

Mothers’ Night (Modranecht) is sacred to Frigga, and the Dísir (holy ancestral mothers of the family). It is held on *December 20th or on the eve of the Winter Solstice and begins the twelve night celebration of Yule. It kind of reminds me of Samhain in purpose , but the Modranecht tradition is specifically for female ancestors, guardians of the home and family. I am so glad I found this tradition. I feel it will have special meaning to me. Frigga has become my patron goddess over the last few months, and I’m exited to be doing this special ritual in honor of her, and also I find it wonderful that I will be honoring my dearly departed mother in the same ritual. I hope my daughters will want to share in this with me, but who knows, they’re teenagers.

My altar set-up is with decorated Yule log in middle (I don’t have a fireplace so I put candles in drilled out holes of a mini log), framed pictures of mom and grandma along the side, Matronae statue (represents the Dísir), image of Frigga, ale or cider & blessing bowl, blót-tine (an evergreen twig used to sprinkle/asperge the ale from the blessing bowl over the area to bless it), bread offerings, candles, and decorations. 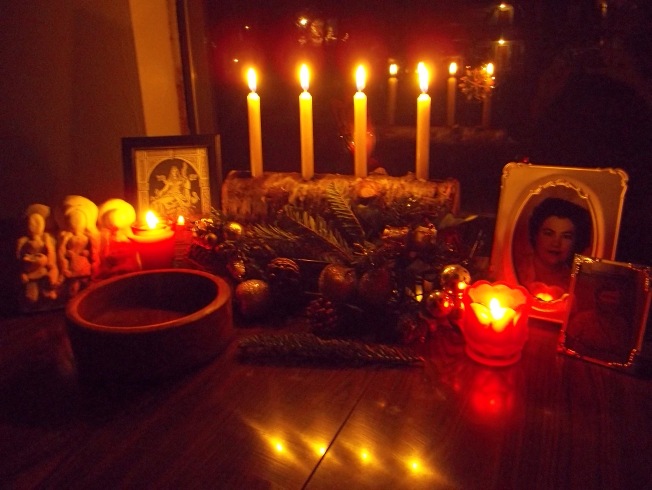 ~Toast to the Mothers. (Adapted from one I found on Ravencast.)

Hail mother Nerthus, Sacred Earth, you who nurture us. May you continue to uphold us.
Hail mother Frigga, beloved Great Mother of hearth and home.
May you keep our household whole and safe.
Hail mother Freyja, Lady of the Vanir. May we receive prosperity in the coming year.
To our family’s Mothers, our Dísir, going back in a line to Elmbla,
You who have watched over us and loved us always. Bless us in the coming year!
We remember you with love and honor you this night.

~Share a special meal. This won’t be a big feast, but a simple meal of Golden Cream Soup and sun-shaped bread. (I don’t plan on having a big feast 12 nights in a row!) I chose this soup for several reasons… It’s a milk-based soup (obvious symbolism there), also a homey comfort food… and the color of the soup is golden like the sun with little carrot sun discs in it. So it has both solar and homey symbolism. And oh it tastes so good, a real family favorite!

*The Solstice is a changing date, and some Ásatrúar choose to commemorate Modranecht on the 20th even when it doesn’t fall on the eve of the Solstice. This is because when you are celebrating Yuletide as a 12 night event, starting on the 20th means the last night of your celebration ends up being on our modern culture’s New Year’s Eve. This holds special significance because the 12th night is Oath Night.

Cook vegetables and seasonings in broth until veggies are tender, about 20 minutes or more. Mix flour with small amount of the milk. Stir to get lumps out, then add remaining milk until blended. Add to veggies, cook until thick. Stir in cheese until melted. Do not boil.